After nearly a year without updates, PlayStation 2 emulator PCSX2 has received two new versions in a week. Version 0.9.6 was updated to perform better in OS X Lion. Then 0.9.7 Alpha was released a few days later. Zedr0n included side-by-side screenshot comparisons to showcase the visual improvements between 0.9.6 and 0.9.7. You can get it, and check out the screenshots, at the PCSX2 for Mac website. As with all alpha software, proceed with caution.

MacScene regular seanstar has released new software for the NES Power Glove—more than 20 years since the ill-fated contraption was mercilessly retired. NESGlovPhone lets you perform music in real-time, on an actual NES, using the Mattel Power Glove to interact with the NES sound chip. It offers a "reasonably intuitive musical interface" and multiple modes of interaction. So it turns out it wasn't an April Fools joke. If you have a working Power Glove, NES, and devcart, get your copy at the Psych Software website.

Apple II emulator Virtual ][ has hit version 7.0. The new update provides full OS X Mountain Lion compatibility, improves accuracy of high-resolution colors, modernises the appearance of the main window, added the Bulgarian character set, and added the option to save a memory dump of the virtual machine to a file. Get it from the Virtual ][ website.

Continue reading for more updates, including new versions of Micro64 (plus a video), SheepShaver, CrossOver Mac, Boxer, Stella, and more.

RGotW: Castle of the Winds 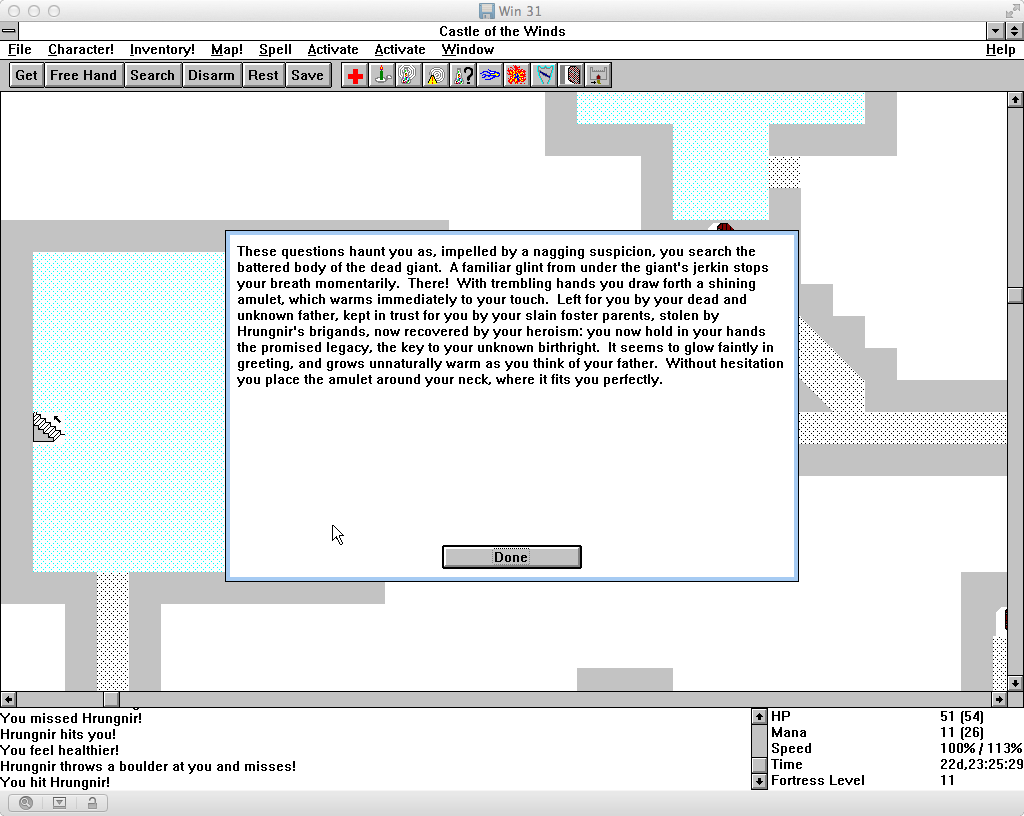 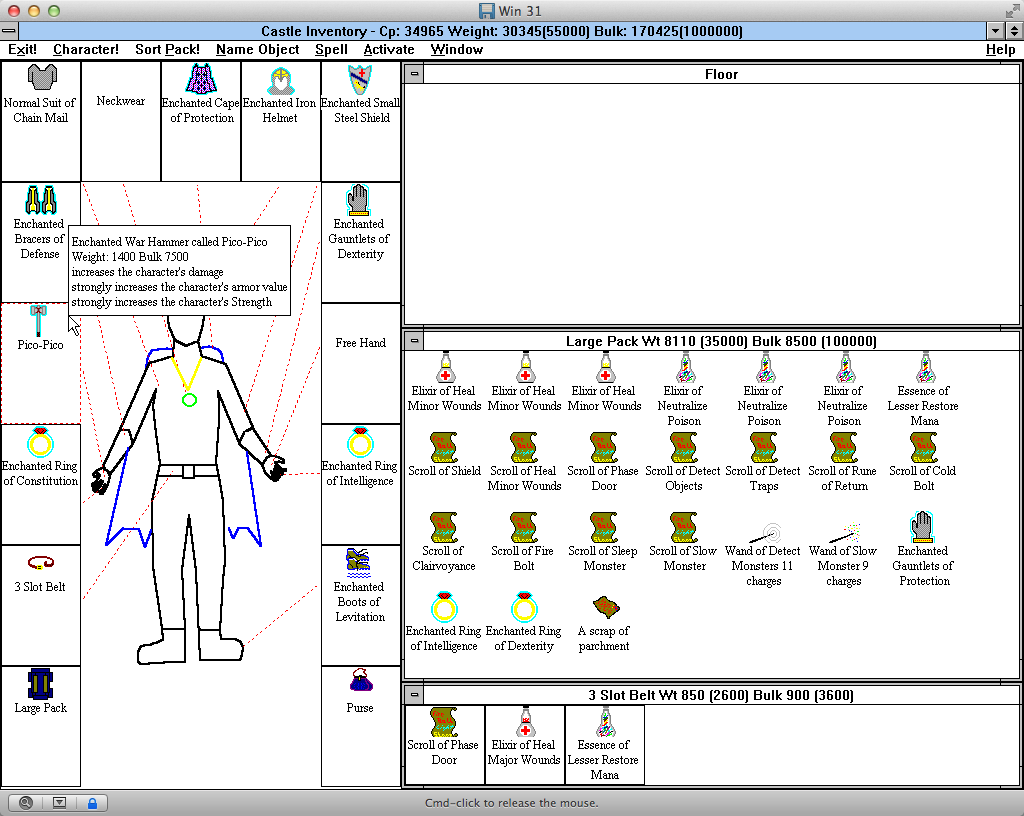 Boxer, a DOSBox-powered DOS emulator, has been updated to version 1.3. The release notes list taking screenshots and fast-forwarding games among the new features, with heaps of bugfixes and improvements to input handling and gameboxes. Get it from the official Boxer website.

Multi-system emulator Mednafen has been updated to version 0.9.22-WIP, while Jazzin's launcher app NekoLauncher Mednafen received an update (0.9.22 Build 21) to fix a crash bug. Mednafen's new version includes improvements to and L3 and R3 button simulation in the PlayStation emulation, improved Sega Genesis/Mega Drive YM2612 emulation, and broken compatibility with 0.9.21-WIP Genesis/Mega Drive save states. See the NekoLauncher site for more details, and download it at the Mednafen forums.

Amiga emulator FS-UAE has been updated to version 1.2.1, fixing a crash that occurred when saving states with mounted directories. See the FS-UAE website to learn more about this games-focused emulator.

CrossOver Games is no more. Codeweavers has rebranded and merged its two "Windows apps on a Mac" products, CrossOver Pro and CrossOver Games, into CrossOver XI. The new version comes with a huge change log, with key updates including Wine 1.4, an improved registration method, RAR file support, support for several .Net components, and a host of Microsoft Office improvements. You can learn more about CrossOver XI on the Codeweavers website.

FS-UAE, an Amiga emulator focused heavily on games, has received several updates since its initial release on February 4 this year. FS-UAE is built on the WinUAE code base, and can be fully controlled with a gamepad. The most recent update (0.9.10) adds experimental net play support. Check out the official FS-UAE website for more details, and a download link.

Nintendo 64 emulator Mupen64Plus received its first official update in more than 13 months a few days ago. Version 1.99.5 updates the audio plugin, input-SDL plugin, video plugin, RSP plugin, core emulator, and Consule-UI front-end for Mupen64Plus 2.0 API versioning; adds support for the Nintendo 64 real-time clock; allows 8-bit PNG images to be loaded for hi-res textures; and fixes many bugs. The full list is on the Mupen64Plus ReleasePage. You can download the emulator from the project's Google Code downloads page.

Boxer, a DOSBox-based DOS emulator, has been updated to version 1.2.2. This version adds the ability to paste text into the DOS prompt, makes improvements to keyboard input, changes the default games folder location to ~/DOS Games, and fixes several bugs. See here for the full list of changes and a download link.

It's two months for the price of one, since we missed the roundup last month.

Aleph One, the open-source continuation of Bungie's Marathon 2 engine, has reached its 1.0 milestone after 12 years in development. For those unfamiliar with the project, Aleph One allows all three games in the Marathon trilogy (which are now freeware) to be played on modern systems, with OpenGL shader support, mouse-look, gamepad support, mod support, and Internet co-op and multiplayer. The new version fixes lots of bugs, offers a plethora of Lua updates, adds HD graphics to Marathon 2, and more. Get it, and the Marathon games, from the Aleph One homepage.

Legacy computer emulator OpenEmulator has reached version 1.0.1. The Apple I emulation is now working. The authors claim to have the first emulator that features a fully functional Apple Cassette Interface Card and CFFA1 expansion card emulation. Other new features include an audio recorder and a selection of several virtual monitors. Check it out on the official OpenEmulator website.

ScummVM is celebrating ten years of existence with a new release. Version 1.4.0 adds support for Lands of Lore: The Throne of Chaos, Blue's Birthday Adventure, and Ringworld: Revenge of the Patriarch, along with the Amiga version of Conquests of the Longbow. Notable new features include PC speaker support for SCUMM v5 games, better handling of digital/synthesized sound effects in SCI, and out-of-the-box support for building with MacPorts. See the Release Notes for the full list, or head over to the ScummVM homepage.

Mini vMac author Paul C. Pratt is now offering a Custom Variations service for custom-made, sponsored versions of Mini vMac. If you want to support the development of classic Macintosh emulation, this is currently the best option.