The author wishes it to be known that at the time of writing, he had not in fact completed the entire game, and thus can take no responsibility for its continued apparent adherence to this supposedly fictitious version of events well past the chapter he was on at the time.

<Freya> Ragnarok time? Already? Sweeeet! ^_^
<Odin> I know, right? Fight hard, party hard, fight hard some more, feasting, booze… ahhh, makes me glad to be immortal.
<Freya> When is it, then? This week?
<Odin> That's an affirmative! … Wait, why?
<Freya> Well, it's just… I think Lenni's back in town…
<Odin> WHAT? Lenni Valkyrie? Uptight? Formal? The one who's always hearing voices and talking about death and fate and stuff? Man, she's, like, the goddess of wet blanketude or something.
<Freya> I know, right?
<Odin> Hmmm…  Frei! Yo, Frei!
<Frei> *poit* Ye~es? <3
<Odin> Frei- got any more of that amnesia dust?
<Frei> Yup yup! Ooooooohhh… What'cha thinking?
<Odin> Y'know that meadow just outside the castle? If we were to, say, take out all the pollen and replace it...
<Freya> … and then we'll tell all the COOL peeps to just poit straight to the party, and li'l old-fashioned Lenni will probably just hit the meadow, get confused and wander away again, right?
<Odin> Precisely! Damn, I'm smart.

<Odin> Invites--check. Weapons--check. Booze--check. BBQ pit and glorious, glorious meatstuffs--double-check.
<Freya> Lenneth Valkyrie--check.
<Odin> Lenne…what?!
<Freya> She zoned out for a bit at the flowers, but this castle's like the only interesting thing in the area, and now she's making right for us!
<Odin> Dammit, I knew we should have stayed in the city. Ah, well… Actually, this may work out even better, now that I think about it… Frei!
<Frei> *poit* You called?
<Odin> Frei, you get along with Lenni, right? Go out to the gate and buy me some time.
<Frei> Aye-aye, cap'n <3 *poit*
<Odin> Freya--just follow my lead. Be all formal, pretend like we summoned her--Feed her some BS about human souls and the war effort and whatever else you can think of. Do this right, and we can keep Lenni occupied right through the end of Ragnarok AND make this the biggest party evar!

<Odin> …and that's that--just keep asking her for different types of souls whenever the party starts slowing down. But… no one who'd take it too seriously, y'know?
<Freya> Got it. Just…one more thing--didn't we give everyone party favors last age? I know a few got lost in Midgard when someone got drunk and started dancing on the table--
<Odin> Who sets up tables that near the edge of the world, anyway? I coulda fallen and broken my neck!
<Freya> . . .
<Odin> No, really, those humans made a big statue of me, right under the edge of Asgard! I could have broken it!
<Freya> . . . Indeed. Anyway, the favors. What if Lenni starts finding them and calls you?
<Odin> Good point. Better set my autoreply… *ahem* "THAT ITEM IS AN ARTIFACT. All artifacts are the rightful property of Lord Odin. Return them immediately or your evaluation level will drop!"  …aaaand save. Think I was subtle enough?
<Freya> Haha--short setting it to blast it out of every divine chest in all of Midgard as soon as they're opened…
<Odin> I like the way you think! Let it be so. *snaps* And now, if I am not mistaken, we've got some Vanir to pwn!

Or at least that's something like how the plot goes. You, Lenneth Valkyrie, run around Midgard collecting souls and training them to send back to Asgard for Ragnarok, per the instructions of Freya and Odin. Along the way, stuff happens.

Valkyrie Profile was from the golden era of pre-merger Enix, and anyone who has played Star Ocean 2 will notice a lot of similar DNA in the audio and visual content. Graphics—apart from the world map—are almost strictly hand-drawn 2D-on-2D, layer-parallaxed for depth to very good effect (although animated background layers occasionally cause slowdown). The soundtrack ranges from rustic cultural to fast rock, which, while jarring at first, does ultimately fit the mood. The gameplay mostly revolves around the dungeon mechanics, which feel a bit like Megaman Zero but with a Norse goddess. 2D scrolling dungeons involve running, jumping, sliding, climbing, sword-slashing and a limited amount of puzzle-action using magical crystal-shots.

Combat is handled on an entirely different interface, and the battle system is like nothing else I've ever played—although Ar Tonelico may echo it in a few respects. Play proceeds on character versus enemy turns, with each side exhausting all their actions, or manually ending the turn, before handing off to the other. Characters are mapped one to a button, and have essentially one command—"act." They may act in any order, but once a character moves, combat becomes a tightly-timed action-hybrid affair full of chained techniques and reactions for as long as characters continue receiving commands. Via a single special-commands menu, any character who has not yet attacked may also change weapon, use an item, or cast magic—provided they are fully recovered from any previous strenuous action. There are also some highly-specific but brokenly-powerful weapons and moves available from fairly early on to add an additional level of anticipation and strategy.

Character parameters increase with level, and abilities are purchased on a points system which will likewise be familiar to anyone who has played Enix's Star Ocean series.  Unlike in Star Ocean and other similar systems, however, abilities and traits don't always grant in-game benefit.  Some are reserved strictly for increasing a character's "Hero Value" and qualifications related to missions they will receive once deployed to Asgard.

Beyond that, the most innovative, if perhaps contentious, feature is that the game proceeds in "chapters" in which only a fixed number of actions may be taken—some combination of character recruitments, character cutscenes, dungeon crawls, and resting. Ultimately, though, this feels less like a constraint and mostly serves to keep things moving when the player might otherwise be inclined to grind ad-nauseam. The chapter/action structure also reflects how the plot progresses. The meta-plot regarding the main character is told only indirectly through tangents to a number of otherwise independent vignettes mostly involving the death circumstances of each recruit. The particular flavour of plot/ending is influenced largely by seemingly innocuous actions in the mechanics of gameplay—what side-events you abandon your duties for, what recruits you send to war when, and generally how uncooperative you start to become while still keeping on track for victory in Ragnarok. Indeed, this has been the most vexing element in my initial playthrough—the "best" ending is only attainable by aggressively disobeying instructions at just the right time, which, to be performed most simply, requires actively not exploring excessively much of the game until that point.

Valkyrie Profile has seen, to my knowledge, one re-release and one sequel, putting it not among the least respected titles of its era, but still in a bit of a niche by itself. If you have the opportunity, check it out. It is, by design, not excessively long or too dauntingly difficult, provided you do a little research beforehand into which of the three endings you want to play for. 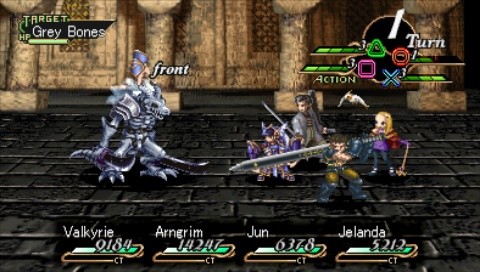 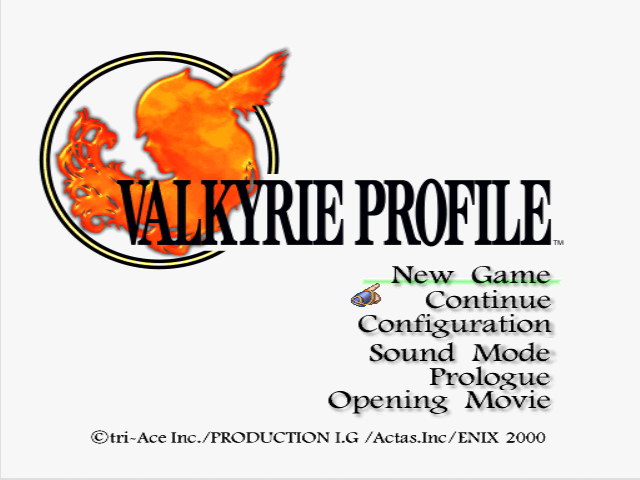